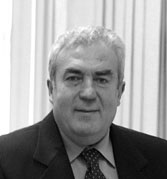 He was born in Bitola in 1950. He graduated from the Faculty of Law in Skopje in 1978.
He exercised many public offices in the judiciary and he was also president of the Basic Court in Bitola. In 2003 he was elected Public Prosecutor of the Republic of North Macedonia by the Assembly of the Republic of North Macedonia.
He exercised the office of State Public Prosecutor within one mandate period, and then he continued his professional career as a lawyer.
He died in Skopje in 2013.