PUBLIC PROSECUTOR OF THE REPUBLIC OF NORTH MACEDONIA 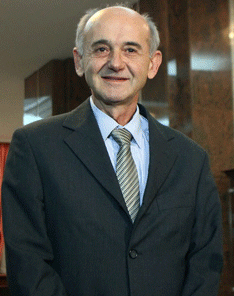 The Public Prosecutor of the Republic of North Macedonia, Ljubomir Joveski, was born on 03.01.1954 in the village of Dolgaec, Prilep. He completed his secondary education at the Gymnasium  “Cvetan Dimov” in Skopje and graduated from the Faculty of Law at “Ss. Cyril and Methodius University” – Skopje in 1978. He passed the bar exam in 1983.

After graduating, he was employed by the Republican Secretariat for Justice in 1979, where, after his apprenticeship, he started working as a clerk, a senior clerk and later as an advisor-inspector in the Sector for Execution of Criminal Sanctions. During the same period he worked as a Secretary of the Council for Execution of Criminal Sanctions, Secretary of the Commission for Conditional Release of Convicts, President of the Commission for Professional Examination in the Security Service in the Penitentiary and Correctional Institutions and as Secretary of the Bar Examination Committee.

With respect to his other activities, he was President of the Management Board of the Academy for Judges and Public Prosecutors for some time, within two terms of office he was a member of the Presidency of the Association of Penology in the Republic of North Macedonia, and within one term of office he was president of this association. In addition, he was also President of the Assembly of the Association for Criminal Law and Criminology of the Republic of North Macedonia for a while.

He participated in several work groups charged with drafting laws in the field of judiciary, such as the Criminal Code, laws on the criminal procedure, prosecution and court related laws, laws related to the Academy for Judges and Public Prosecutors, offences, enforcement of sanctions, the Council of Public Prosecutors and other.

In addition to this, Joveski has participated in workshops and counsellings in the country and abroad, where he has given speeches in the field of juvenile delinquency in the Republic of North Macedonia and in relation to the grounds for detention, the education of convicts while serving their sentence and judicial supervision over the execution of the imprisonment sentence.

Ljubomir Joveski was elected as Public Prosecutor of the Republic of North Macedonia on 25.12.2017.

15 public prosecutors have exercised the office of Public Prosecutor of the Republic of North Macedonia since 1944.